Update: I got a response on twitter from Ezra Zygmuntowicz see below. 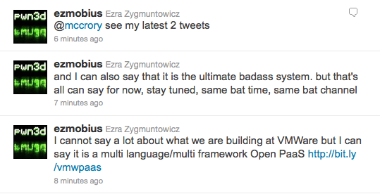 Following yesterday’s post looking into Ruby’s creator Yukihiro Matsumoto’s visit to VMware’s Headquarters, I have gotten new information.
VMware has hired former EngineYard Co-Founder & Software Architect and Ruby Developer Ezra Zygmuntowicz to work on Ruby for VMware (Some type of project is underway). According to this source, there are rumors of a Ruby based Cloud Controller of some type being worked on. This may begin to resolve several of the bits of information from yesterday regarding VMware’s interest in EngineYard and Ruby. There is also further confirmation that Ruby is getting a lot of attention inside of VMware and the company is looking at joining Ruby organizations (I believe in an attempt to begin building credibility inside the Ruby community).
Note that I am referring to Ruby broadly, the specific Ruby derivative could easily be JRuby vs. pure Ruby.